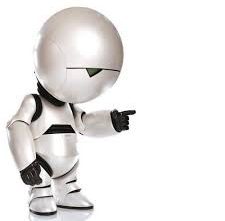 “Funny,” Marvin intoned funereally, “how just when you think life can’t possibly get any worse it suddenly does.” It was almost as if he predicted 2020 and the Coronavirus lockdown.

Marvin the Paranoid Android is a character from Douglas Adams’ Hitchhikers Guide to the Galaxy. I remember him on TV the first time around in 1981, before the remake of the film in the 2000s when Warwick Davies was inside the costume and Alan Rickman gave voice to his miserableness.

With his Genuine People Personality (GPP) software, Marvin may be a robot but he also has feelings and a (miserable) personality (“I didn’t ask to be made“) . Brilliant in his own mind, but forced to perform menial tasks for others, Marvin’s frustrations with his life touch a nerve.

Although my life will be infinitesimally short compared to his (he was several times older than the universe itself), and my brain isn’t the size of a planet like Marvin’s, I can see where he was coming from sometimes.

The challenge for all of us is to ensure we don’t become Marvins and only enjoy ourselves once it’s too late (we’ll get to his moment of happiness in a bit).

Apparently the best conversation he had was over 40 million years ago with a coffee machine. Having bought my own coffee machine as a redundancy gift to myself I can empathise with how a gurgling caffeine cruncher can become a conversational necessity, especially during the Coronavirus lockdown.

But Marvin’s insight didn’t stop there, and his comments have an uncanny knack of reflecting things that happen to many of us in middle age.

On leaving work, or being made redundant

Before I left my job due to redundancy (the third time), people tried to keep me occupied despite the impending departure. Although physically and mentally able to work, the drawn out leaving process with its extended goodbyes and awkward sympathies made it difficult to focus.

Marvin knew that overthinking wasn’t a good thing, but he too struggled to be distracted.

Marvin: “I think you ought to know I’m feeling very depressed.”
Trillian: “Well, we have something that may take your mind off it.”
Marvin: “It won’t work, I have an exceptionally large mind.”

As I became increasingly sidelined, the sort of work I was given became correspondingly less interesting and relevant. People felt obliged to keep me busy as they thought that was the right thing to do. Marvin also felt he wasn’t being challenged, but maybe the lesson was he never said what he really wanted to do:

“Can I pick up that piece of paper? Here I am, brain the size of a planet…But I’m quite used to being humiliated. I can even go and stick my head in a bucket of water if you like.”

From the beginning Marvin the Paranoid Android had issues with his parts, especially his diodes.

“And then, of course, I’ve got this terrible pain in all the diodes down my left side.”

I had a pain on my left hand side too! Fortunately for me my hip was replaced when it stopped working after almost 50 years. Marvin’s diodes stay with him to the end, when’s he older than the universe itself and after all his other parts have been swapped.

However we were both defined by our willingness to moan about our ailments (have I told you about my hip?) even when small in comparison to other people’s aches and pains.

On keeping in touch

“I was very bored and depressed, that’s when I connected myself to the computer. I talked with him for some time and explained him my views of the universe.”

As a way to keep sane during redundancy and lockdown I tried talking to people on the phone (this was pre-Zoomtopia after all). Although I didn’t have Marvin’s impact, I’m sure there was a sigh or two when I got through to my special friends and wanted to discuss how my Marigolds were growing and how my three Twitter followers were getting on.

Marvin ended up on his own for long periods without contact (lockdown anyone?). Sometimes it was through bad luck (like when everyone but Marvin was propelled into the far-off future following an explosion) or because his own depressing monologues pushes people away (did I tell you about my redundancy?).

My advice here would be to keep banging on the door, and get a hobby or two to have something to talk about. No one wants to hear about your pains, and certainly don’t want to see your hip scar.

“My ability to be happy could fit in a matchbox, with the matches inside it.”

In his spare time Marvin wrote songs and poetry, none of which were particularly uplifting or even good (as some have said about this blog).

In real life in 1981 he reached no.52 in the charts with “Marvin”, and later released “Reasons to be Miserable”, a comment on Ian Dury’s song “Reasons to be Cheerful”.

Radiohead even honoured him with a tune. Their song ‘Paranoid Android’ was a direct reference to Marvin, which shows his impact on others..

So in many respects he was actually quite successful. Certainly more than me and my few readers and fewer followers. It also meant he could actually take his mind off his work. Midlife hobbies are vital. What are yours? If all you can answer is work and TV then you may need to think again…

“I wish you’d just tell me rather trying to engage my enthusiasm because I haven’t got one.”

Back in work with my hip replaced I, like Marvin, still find things to moan about. And like Marvin, my programming means that although I moan, I’ll still follow instructions however daft they seem. He picks up litter, opens doors and becomes a car park attendant. I have been told to colour my Powerpoints differently, change my font and to “empty my stress container” each day as a way of staying sane,

In this case I think Marvin may be right. It’s difficult to always be enthusiastic about what you’re doing, despite someone telling you to clap and shout each day as a way to bring change and positivity into your world.

And how does it end?

At the end of the book (So Long, And Thanks For All The Fish) Marvin the Paranoid Android ends up on the planet Preliumtarn, now thirty seven times older than the universe itself due to his time travelling. His body parts are broken and barely work, having been replaced several times (apart from the diodes down his left side which never worked).

With some friends’ help, Marvin arrived at the mountain where God’s final message to the universe was written: “We Apologise for the Inconvenience.” After reading this, Marvin the Paranoid Android remarked “I think I feel good about it,” and finally died, happy.

(In the film version this doesn’t happen, although he does end up with a hole in his head which can never be good news).

In the final analysis

Marvin the Paranoid Android was a brilliant creation. I have to wonder whether Douglas Adams used him as a way to vent his own frustrations on life, and certainly he never expected the character to be so successful.

At the end of the day Marvin was a grumpy old robot, who worked hard, explored the universe and eventually found some happiness. We’re not so different. We just need to work out how to be happy (like Don?) and not wait until we get an answer to life, the universe or anything, as there isn’t a clear one.

As Marvin said, “You think you’ve got problems? What are you supposed to do if you are a manically depressed robot? No, don’t try to answer that. I’m fifty thousand times more intelligent than you and even I don’t know the answer. It gives me a headache just trying to think down to your level.”

I count myself lucky I’m less intelligent, younger and in less pain than Marvin the Paranoid Android. It’s a start at least, although maybe it means I’m not going to feature in a Radiohead song. Yet.