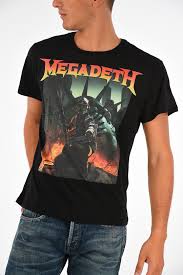 Interview clothing had never really interested me until I was asked to do an interview this week via Google Hangouts. That’s cool and digital I thought, until I realised I’d have to find a backdrop that didn’t show my house as a bombsite. Having been made redundant I needed a job and in middle age, I couldn’t afford for the small details to trip me up.

Then came the burning question of what to wear? I mean, I would be at home, so a suit and tie was out. I guess. I actually knew of some people who did go down this route, but for me it was a little too cringey.

At the same time a Megadeth t-shirt (if I had one) might show me as a trendy young thing, but with my body shape there would be room for all sorts of issues. An informal open-necked shirt would make it look like I was doing Friday dress down at home, which had a slightly desperate feel.

I did think of wearing plain white as it means I would be a “blank canvas” and nothing could be drawn about me in those first few precious seconds from what I was wearing. This was dumped when I realised it might make someone consider my bed head hairstyle instead. Also white doesn’t work for me, with the risks of unnoticed tea stains or jam flecks being too great.

And so what was my interview clothing?

In the end it was the dark polo shirt that won the day. Plain to prevent prejudice. Dark to hide the physical undulations of my expanding belly that appear whilst slumped in my chair. Smart enough to be office casual but also eminently home wear. Job done.

However it did spur me to question my whole interview and office clothing thinking. I had a second interview in the diary for the following week. This was to be held at the company’s office, on a Friday and according to the recruiter required “formal business attire”. By this I assumed suit, rather than DJ or tails, but even then, on a Friday?

It turned out to be ‘spot the interviewee’ day, when everyone else (who were commuting only because they had some social occasion after work) was dressed casually, and gazed on my smart awkwardness with pity. They knew where I was going.

At least on this occasion the only decision was tie or no tie. I decided no tie as who does wears a tie nowadays? The only people I’ve seen recently sporting ties have been politicians wearing them like a football shirt to show you allegiance to the colour. You never see a Tory politician wearing a red tie, or vice versa for Labour, despite them going much better with their suits and shirts.

Obviously there are other things you can do. Shaving helps (unless you’re growing a beard), and trimming any unsightly nasal hair has to be a bonus. No one wants to see that. Male grooming may be a minefield, but occasionally it’s worth it.

It should go without saying that before interviewing check the dress code that the company has, or ask what they expect. However not everyone does. Nowadays, and especially as you get older, you don’t want to be the stuffy suit wearing executive interviewed by the young informal dude. Or worse, the stuffy ex-suit wearing executive squeezed into a Megadeth t-shirt trying to look cool.

Interview clothing could make all the difference

Interview clothing could be the difference between a job and no job. Don’t wear something you’d be embarrassed to be seen out in. It’s fine margins at the end, and often it’s a subjective assessment not related to your knowledge or skills that makes the difference.

More tips of what to wear (or not) can be found here.