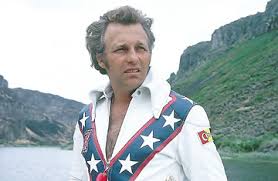 For those of us in midlife the name Evel Knievel means something. For a start it was a really cool name, and it was his own. Well Knievel anyway. Evel he added as a stage name. But he looked good and did things most of us would cringe at doing, partly because many of the things were bonkers..

Evel Knievel also conjures up my enduring envy of a friend who had an Evel Knievel Stunt Cycle. I’m still friends with him, which shows you can put up with a lot in life. And besides, although the adverts had the bike flying through the air, in reality it hardly got off the ground. Plastic Evel spent most of his time falling off the bike and lying in awkward positions. Very much like the real man.

That said, Knievel was a shining example of how you can recover from broken bones and go on to jump buses, but eventually ruin it all doing something silly in a hot tub or playing golf. Either way he counts as one of the stars who have had a complete hip replacement and made light of it.

The making of Evel Knievel

Knievel came to fame in the sixties when he jumped his motorbike over the the fountains of Caesars Palace in Las Vegas. The jump was fine but the landing hurt.

In front of a shocked audience he broke many bones, and was wheeled off to hospital in what was to become a recurring theme. Knievel suffered a crushed pelvis and femur, fractures to his hip, wrist, and both ankles, and concussion.

However he was not put off. Like me, physio didn’t phase him. Within 5 months he was jumping (and crashing again) as he pursued his dream of flying over the Grand Canyon on his motorbike.

The US Government weren’t keen on that idea, so in 1974 he tried to jump the Snake River Canyon on a specially built rocket-bike. However again it ended badly, and he was wheeled off to hospital once more.

Similar to Eddie the Eagle later in life, Evel Knievel’s showmanship and disdain for death were so admired that he became a folk hero. He had songs made about him and was featured in movies. In 1977, Hollywood tried to make him into a movie star in “Viva Knievel!,” a film with Gene Kelly and Red Buttons. His showy outfits and showman lifestyle appealed to a public needing a hero.

So by the time my friend got his special present, Evel Knievel’s plastic bike had sales of hundreds of millions of dollars. Stick that Xbox.

Unsurprisingly Knievel became more cautious later in his career and attempted to reduce the risk in his stunts, particularly after a crash at Wembley Stadium on May 26, 1975. This one was particularly bad, and after it he said: “I’ve got to tell you that you are the last people in the world who will ever see me jump because I will never, ever, ever jump again. I am through.”

To be fair most people weren’t surprised. After all he had just failed to clear the last of 13 buses, which resulted in more broken bones and being wheeled off to hospital again.

Despite breaking a hand, fracturing two vertebrae and his left pelvis, Knievel changed his mind about retirement three days later.

His last major event was supposed to be jumping over a tank of live sharks in 1977. However in practise he crashed the bike into a camera man, and was wheeled off to hospital once more with two broken arms. He was also upset about the damage done to the cameraman, and subsequently retired from being the main event to supporting his son who bizarrely decided to follow in his father’s footsteps.

Truth is that Evel Knievel spent a lot of time falling off his bike. He claims he spent half of his career in hospital, breaking 37 bones seriously, and brushing off fractures as minor incidents.

Sadly for him though in retirement things didn’t improve.

He fell playing golf and ended up needing a total hip replacement. This hardly figured on his radar of problems saying “I recently have had a full hip replacement and a liver transplant, and I’m getting used to the medication”.

He also fell twice in his whirlpool, breaking a knee and ribs. Given he also needed a new liver due to his alcoholism (and/or as a result of numerous blood transfusions), the fall may have been a result of the drinking.

There’s a lesson there for anyone sipping champagne in a hot tub right now.

You’d think he had suffered enough, but subsequently he had Hepatitis, a stroke, diabetes, a bleeding oesophagus and eventually died of pulmonary fibrosis. Apparently he coped with all this by having a morphine pump stapled to his abdomen, which sent drugs flowing to ease his bad back and all the other aches and pains from his accumulated breakages.

Robert Craig Knievel may not have made his seventieth birthday, but he certainly squeezed a lot out of his body in the time he did have. As a celebrity who made light of a hip replacement he has to be up there in the top five.

The difference between Murray and Evel Knievel was the dedicated physios and support staff Murray had to get him back on a tennis court. He wasn’t jumping over double decker buses with nothing more than a helmet and Elvis Presley style outfit.

I’ve also had my fair share of knocks and bruises, including broken hand, arm, shoulder, and nose, stitches in my head and chin, torn cartilage in both knees, and that’s without mentioning my hip replacement. However compared to Evel Knievel, I am a moaning amateur.

So I raise my glass to others who have been through so much more, and that doesn’t mean you need you to jump over double decker buses to prove yourself.