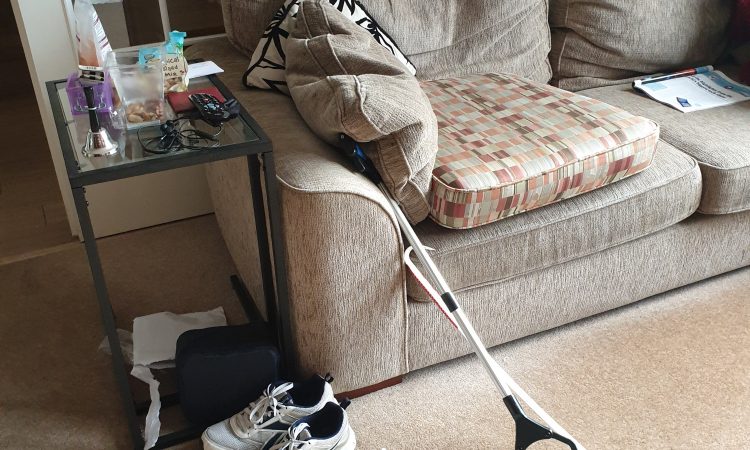 So it’s 18 months after my hip replacement . Back then I was redundant, and feeling a little bit down.

At the time I worried about not getting out for six weeks, missing out on the beers and after work shenanigans. I worried I’d lose contact with people. If I had known then it would be almost eighteen months until some degree of normality was resumed, I probably wouldn’t have been as worried.

To be fair, I’m still a fan of hip replacements. From where I was back then, to where I am now, I’d always recommend taking the option. I can now walk, chase a dog and cycle pretty much pain free. I can’t quite believe where the time has gone, but that’s midlife for you I guess:

18 months after my hip replacement and niggles remain

The hip’s not quite perfect though. I recently restarted physio to try and resolve a niggling pain in my groin (hip flexor). This tended to be when I had to lift my knee or if I was cycling crouched over the handlebars. Socks were a twinge, as was kicking a football. Admittedly it’s probably not been helped by sitting in the same chair for hours on end working from home during lockdown, but then that’s been bad for so many reasons.

Anyway, any cynicism I felt for physios quickly disappeared as my new best buddy got me to lift my knee to my chest with a fitness band for resistance. Guess what? That made the move pain free. I told him I was surprised, which he then said he was surprised I was surprised as that was his job after all. Slapped wrist accepted.

It turns out that although I talked a good story about getting a backside to crack nuts with, unfortunately I had developed only one (the wrong) side of the nutcracker. This was despite many months of exercises, and goes to show the value of having someone telling you early that you’re not doing the exercises in the right way. Bad habits are hard to break.

Using the resistance band basically “switched off” the muscle that caused the pain and activated those glutes that were soft and peach-like. The physio advice was two-fold. Firstly do exercises properly. And then secondly, do them enough to get your brain thinking differently.

Bad habits are hard to break

It just goes to show, that physical pain can also be driven by your brain telling you to do the wrong thing. It’s the power of habit (in this case built up 18 months after my hip replacement). To save processing energy and to free up resources for more conscious activity, your brain drives habits into subconscious mode. You may know you’re doing something wrong, but changing your behaviour is hard. It takes energy and effort, and that is tiring over time, which is why it’s so easy to fall back into bad behaviours.

It’s why I eat a lot of cakes, spend ages reminiscing about holidays and struggle not to check my phone for messages every three minutes. I know they’re wrong, but often I find myself doing them without realising.

Retraining my brain and my body

Anyway I am now retraining my brain to think differently. It’s a combination of strengthening the muscles and consciously acting to create a new habit (in this case walking more with my core and glutes working, rather than my hip flexor pulling my leg forward). Watch me move. John Travolta eat your heart out (or at least the John Travolta in Grease).

It’s something maybe to think about for other things to. Perhaps sometimes our subconscious, while saving energy, isn’t actually helping us. Maybe occasionally you have to stop, become aware of what you’re doing that’s wrong and retrain your brain to think differently. It’s not an easy ask. I’m three weeks in and feeling some improvement, but it’s not natural yet. And I’m still eating cakes.

I guess one day the pain will be gone and I won’t notice. I may not even appreciate it as by then it will just be the way I do things. At that point the hip replacement will score even higher on the chart. For now I’ll just be grateful I can pull my beautifully folded socks on normally again.

So, 18 months after my hip replacement, does anyone want to see my scar?

Hi buddy, enjoyed reading your blog. Had right hip done in December 2019 and left one in May 2020, I am turning 65 this year. What can I say: I am in the gym four days a week, hike two hours every weekend and no longer cringe in advance when turning over in my bed, pain 100% gone. Everybody’s operation and rehab is different, but every time I get a check up with my surgeon, i thank him profusely. A thought for the physical therapy guy who helped me a lot post op. Cheers, and if you’re in sufferable pain,… Read more »

With you there. Can’t beat being able to sleep at night and walk without pain!