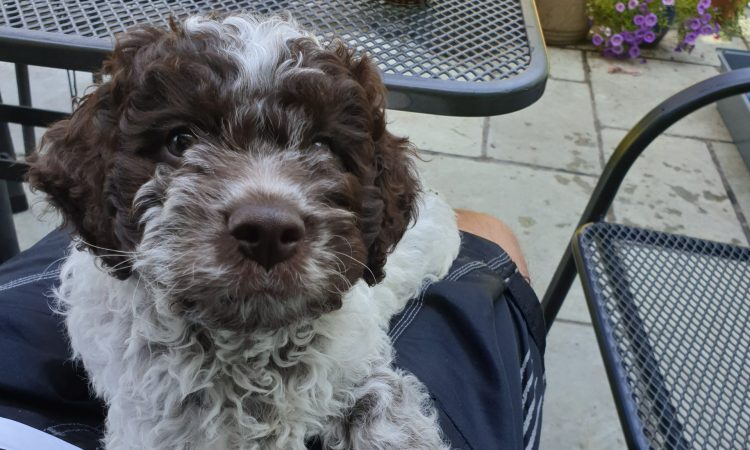 So your puppy is home. The crate is open and welcoming. There is a box filled with toys. The dog is asleep and you’re sat with a beer in sunshine. You sit and smile. This is what owning a puppy is all about. For five minutes at least.

Next thing you know something is chewing your shoe. You playfully brush him off, getting your fingers nipped for your troubles and spilling your beer in the process. The dog starts lapping at the beer so you rush to distract him while simultaneously hosing the beer away. As you turn the hose off you notice the bottom of your chair is hanging off, and you realise you won’t be sitting down again for some time to come.

Which is, to be fair, partly the reason I got one. Walking is good for your (replaced) hips.

Owning a puppy is like having a baby on steroids. While a baby will lay, self contained in a cot, an awake puppy is a whirlwind of energy. If this type (Lagotto) is supposed to be a calm, placid dog I’d hate to meet an excitable one.

On the first night after some strenuous playing and vaguely annoying squeaks we progressed to sleep. Bedtime on the first night was fine. Into the crate, soothing words, door shut. We had got the perfect dog. Then the lights went out and the crying began. With a bit of comforting he was asleep again, but just before 5am the day started. Who knew the jobs you could get through by getting up that early. By the time I tried to log on to my first work call,. the dog had fallen asleep again and I felt I had done a day’s work.

By day 5 this routine was still draining, but he was calming down. 5am had become 6am which felt like a lifetime of difference, and to be fair, he was pretty keen to get outside and do his business by the time his crate was undone.

First thing in the morning poo bags were got through at a rate of knots. There’s nothing the dog, let’s call him R, liked more than a morning bowel emptying session. Just as you bagged and binned one warm pile, there he was squatting again, squeezing out another one. Once more there’s the praise, the bagging and binning, and before you know it a third twizzler is being dumped on your lawn.

Now if that happened once I’d get it, but every day? Why not squat a while, read a book, scroll through something on a phone. No need to move! Turns out dogs are nothing like adults.

I also quickly grasped that shoes had to be worn indoors. Having marvelled at what I kept spilling on the floor making my feet wet, I realised that unless you want dog urine soaking into your socks every couple of hours shoes were the answer.

He liked nothing more than leaving strategically placed puddles. Normally these were by the kettle, which I missed due to my focus on making the perfect cup of tea. Then cunningly sometimes they were between kettle and fridge, catching me getting the milk while my mind was on the biscuits.

Owning a puppy and garden carnage

Taking him outside caused chaos too.

My garden was reasonably well kept before his arrival. Within a week it looked like a scene from a war film. Craters appeared in flower beds and plant pots. Brightly coloured toys littered the garden. The remains of flowers and plants appeared everywhere. Steel meshes were erected to protect weak points. Even the lawn developed holes. Whilst part of me was glad he was outside creating carnage, part of me pined for the Marigolds so carefully cultivated year after year.

Someone once told me they were only suited for roundabouts. Now I had to agree. They were safer there.

Amazon continued to deliver chew toys daily in the hope that one might save the chairs/tables/plants/shoes/anything below table height. Luckily Amazon delivers most things in puppy play friendly cardboard boxes, so each delivery was a two-in-one toy.

The kids were fine with him, in small doses. However dog watching wasn’t as much fun as phone watching and many a time he had managed to disappear before they realised he’d gone.

Not wanting to be an embarrassing owner, I started to shovel vast quantities of treats down his neck in the hope he would sit, stay, come and lay down. In the end we focused on sit. That seemed to work, although neither of us could work out why I wanted him to sit.

He looked at me, I looked at him and we both shrugged. I’m sure, when the time comes to let him loose on the big bad world post his vaccinations (not for Covid by the way) such training will come in handy.

And so ended my free time. The silicone mold business took a back step just as sales were increasing, Zwift was neglected and even the Xbox was unused (by me at least).

Whoever told me owning a puppy was good for my mental health was having a laugh.

I must admit though there is something kind of nice about him being so pleased to see you each time you go in a room. And by the time I got to bed each night my eyes were shut before I hit the pillow, so my sleep problems had gone.

So maybe there are upsides from owning a puppy after all.