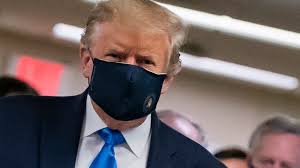 Donald Trump’s face mask resigned from its position as protector of the Western World earlier this week. Citing irreconcilable differences, the face mask claimed that it had fallen out with Mr Trump within a day of being appointed.

“It was an impossible job,” complained the mask. “I was taken on to protect the President, but it turns out he never really wanted me on his staff. I was just there as a prop. In fact I was only taken on when the President realised protective goggles were no help to him. By then it was too late.”

The mask, known as Big M, also shared details of the President’s backroom antics, which included trying to fit twenty staff in a helicopter for a golfing trip, and holding a rally for millions in a small cupboard in the White House (although only seven turned up).

“It was rubbish,” said Big M. “There was no social distancing. No real respect. As a mask I’m there to protect, not be whipped off every time a camera appears.”

Big M was even more scathing of the President’s cleaning habits. “I was filthy within seconds. Fake tan and spittle stuck to me like glue. I was made to feel disposable. There was no way I could cope with Coronavirus as well.”

As for the President, he was in no mood for a reconciliation.

“Big M is a liar, and a useless waste of space. I don’t need a mask. I never needed a mask. I only used the mask to prove that I can still look attractive with one on. I have defeated Coronavirus. Myself. No mask required.”

Asked whether he recommended his fellow Americans wear a mask he said, “Well, for the ordinary citizens masks may help. Or not. But we won’t need them soon. However for people like me, descended from the Gods on Mount Olympus then no, I’d probably say masks are a waste of time.”

Big M, once known as a highly effective mask, is now looking for a suitable alternative appointment. However he claims he was badly marked by the experience, and isn’t sure where to go from here.

“Being a mask for Donald Trump was hard. I don’t envy whoever takes that on in future. I’m thinking of moving into something altogether more pleasant, like a posing pouch maybe, or easy to remove underwear for people with hip problems.”