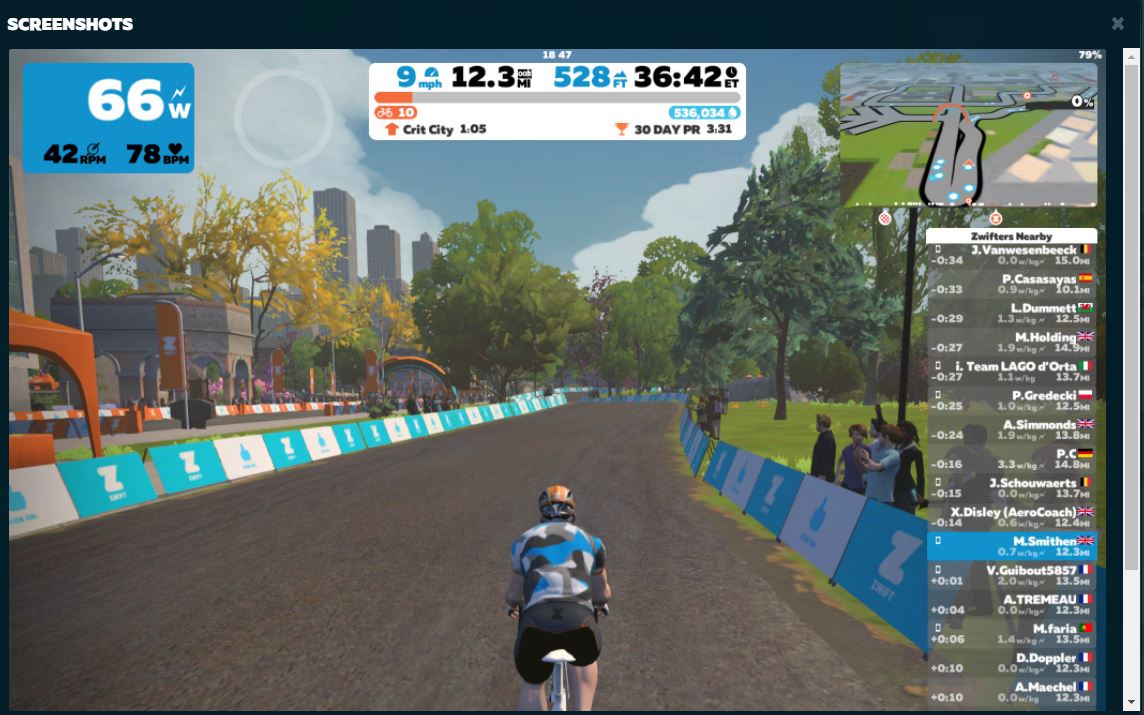 You’re hot, you’re sweaty, and you’re doing it with friends. Could life get more exciting? What does that make you think of? If it’s Zwift for middle aged men then I’m with you.

One thing I could do more of was exercise, and being no fan of Joe Wicks, I got myself a turbo trainer.

I have already described how I ended up liking Zwift and Brussels , but now it’s been a few months I thought it was time for an update (on Zwift that is) and how indoor cycling at 50 can be good fun.

The companion app allows you to join races, wave at other riders and generally control what’s going on with the Zwift game app. You don’t actually need it, but it makes life easier. It’s a bit like signing up on Zwiftpower.com – also not strictly necessary but beneficial if you want to join races and check on your stats, progress and buddies (more on that later).

This set up seems to do me just fine. I don’t don the full lycra, but I do clip in, wear shorts, and a jacket until it gets too warm. I draw the line at wearing my helmet, but given the amount I fall over/off things I am toying with it.

Zwift for middle aged men is a bit different to cycling outside for some (obvious) reasons:

Let’s look at the friends thing. It could be construed by some as cyber stalking by some. Here’s why…

During a race you end up chasing a cartoon avatar, which shows a national flag and name. At the end you beat them, or often are beaten by them, usually by the odd second. Strangely in your head at this point you’ve formed an attachment to the cartoon character close by. You go at the same speed, so it stands to reason you’ve got something in common, right? In a fit of sweaty enthusiasm you tap “follow” in the app, and become their buddy.

After that, each time they enter an activity on Zwift you can be notified. When you are, in a batman sort of way you can get changed, jump on your bike and follow a few yards behind, waving at them with your hand or elbow, or giving them a big “ride on” thumbs up.

It could be seen as a bit weird, but at the moment it’s the closest I get to other people, what with social distancing.

Thinking about it thought I used to spend ages in my garage before I had Zwift, polishing my table football table in case a real friend turned up. I guess it was partly my lack of table football opponents – aka friends – that persuaded me virtual stalking was the way forward. Zwift for middle aged men – it’s more than simply cycling.

And if you want lots of friends you can join a team.

I joined one team (Dads In Riding Trainers – DIRT), not just because of the emotive title (being dirty and all), but because they had a friendly and active social media presence which meant you could see the state of other people’s garages. Turns out my set up is actually quite luxurious. No one else seems to have a table football table.

You can race with other members in team races, or in events sponsored by the team itself. You can even get the same kit and similar usernames to spot others from your tribe during different events.

As I get more followers I hope to build my own team – Midlifers On Zwift (MOZ-zies). I’m hanging it out there for those of you who want to join the real me…. Currently it’s a team of one, but it’s destined to grow.

Racing, going as Zwiftly as I can

My first races have been mixed in terms of the results, but I can say it’s blown me away how hard it is. I’m in group D. That’s the bottom group. People in the groups above storm past me like I’m not there, but in my group I do manage to hold my own. I tend to finish in the middle of the group, usually of rides featuring sixty or more D-listers. It just goes to show. Middle age doesn’t mean being at the end…it means being in the middle.

Zwift, a metaphor for life.

You choose your race by distance, altitude and type (this is where the Zwift companion app makes things really easy). You click on your group in the race events section, fire up the game and then start to ride your warm up. When it’s race time, you’re automatically whisked away to the start line to begin.

The first few minutes are like spinning on steroids, but then it settles down. If you can ride with a group so much the better, but I often find myself in between pelatons. Maybe another life metaphor.

After the race I literally fall off the bike a sweaty puddle. The beauty of this being my garage is that I can sweat, gasp and groan in peace. No one cares. I’m sure my neighbour finds it all a bit odd, but then again they probably found me a bit odd before I started Zwifting.

So is Zwift for Middle Aged Men or Everyone?

Over time I’ve started to see some improvements. I can maintain a faster speed for longer, and even keep moving on the climbs (and some are really steep and hard going if you have a smart trainer adjusting the resistance for you). You track your gain by regular fitness tests and even go up the groups if you work hard enough.

There are many other good things to come out of it. My hip doesn’t hurt. It is an antidote to lockdown lunacy and I am more in balance on the scales.

All in all, Zwift for middle aged men is a good idea. But then it is for everyone. I stalk all sorts.

It’s especially good if you’re locked down. The question is whether I’ll keep it up when the doors open and I have to choose between the pub and the garage. Maybe some motivational friends could help with that….