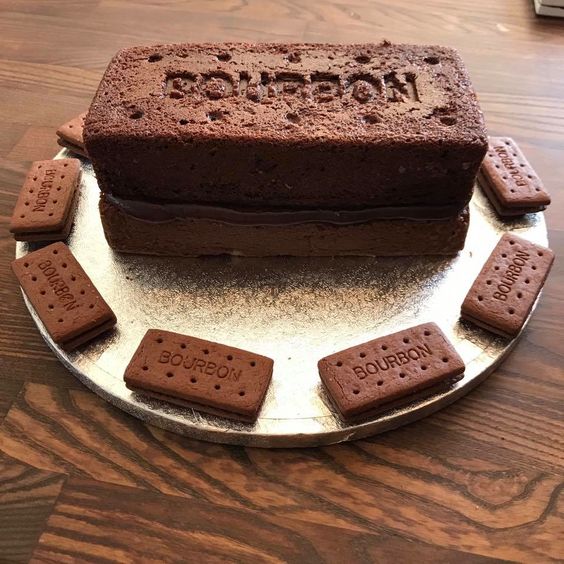 Bourbon biscuits sound posh. They look posh. And they’re popular. A bit like me? Maybe not.

The name Bourbon, with it’s French connection, might make you think of standing at the window of a Parisian hotel, gently dunking your biscuit in nice cup of tea admiring the view. Unfortunately, the days of the French Bourbons are past, and its history is altogether more British than you may think.

What is a Bourbon biscuit?

The Bourbon biscuit is a sandwich-style biscuit comprising of two slight rectangular chocolate–seasoned bakes with a chocolate buttercream filling. Bourbon biscuits are carefully baked to a classic recipe with a smooth chocolatey filling.

The bourbon biscuit can be eaten on its own because it has a fondant filling and is not cracker-dry. However its slightly more condensed biscuit layers makes for good dunking, and they go well with a cup of tea (if made properly of course). The appearance of the biscuit is ‘rich’ making it popular for those wanting to impress in-laws or visitors (remember them?).

The small holes in bourbon biscuits are to prevent the biscuits from cracking or breaking during the baking process, by allowing steam to escape. If the holes weren’t there, steam would build up inside the biscuits, the biscuit would collapse back down and you wouldn’t have a controllable product.

Bourbon biscuits are originally from the United Kingdom and feature in the top 10 biscuits by volume purchased (and therefore presumably eaten). It was also voted 5th favourite dunking biscuit by UK tea drinkers in 2009.

Bourbon biscuits were originally made in 1910 by the Peek Freans biscuit company in London. (Although others have proposed alternative histories, this one is backed up with a genuine museum).

Peek Freans, founded in 1857, was one of the first mass producers of biscuits and created other well-known biscuits including the Garibaldi. Peek Freans was the centre of the Bermondsey local community and employed generations of residents, earning the area the title of “Biscuit Town”.

The factory closed in 1989 as Peek Freans was bought by a succession of biscuit manufacturers, ultimately ending up under the United Biscuits organisation.

Bourbon biscuits (also referred to as Bourbon cream) do not get the name from whiskey (or Bourbon) or contain any whiskey. That’s a myth.

In fact the chocolate crunchy sandwich used to be called the Creola, but some time in the 1930s a product manager at Peek Freans decided that the name Bourbon sounded more luxurious and hence changed the name.

It’s believed he took the name was from the House of Bourbon, a European royal house of French origin. By the 18th century, members of the Bourbon dynasty had held the throne in France, Naples and Sicily. It certainly chimes with the “we want it to be posher” ask of Peek Freans.

There is some debate over the name, including that it was derived from ‘beurre bon’, as they were originally made with butter from the top of the milk, ie the best butter.

Although that’s not the official version, interestingly Peek Freans did have a French Connection. The business grew rapidly in 1870 after agreeing to supply the French Army with 460 tons of biscuits for the ration packs supplied to soldiers fighting the Franco-Prussian War. After hostilities ended, the French Government ordered a further 11 million sweet Pearl biscuits in celebration of the end of the Siege of Paris, The consequential consumer demands of emigrating French expatriate soldiers, allowed the company to start exporting directly to Ontario, Canada from the mid-1870s. So maybe the French connection was behind the name after all.

Bourbon Alfort biscuit is made from whole-grain flour mixed with rich milk chocolate and other halal-friendly ingredients as confirmed by Halal Foods in Japan in May 2015.

You can make your gluten-free version.

1. Heat the oven to 160⁰ Celcius and line the baking sheets with non-stick baking paper-parchment paper is okay.
2. Sift the bicarbonate of soda, flour, salt and cocoa together in a bowl.
3. In a separate large enough bowl, cream the brown sugar and butter ensuring the result is light and fluffy. Add the golden syrup and mix well.
4. Work the flour mix into the creamed mixture until a stiff paste is achieved. Add a little milk in small drops till soft even dough is arrived at.
5. Working on a floured surface, knead the dough, roll it out to a thickness of about 3mm and cut out the bourbon biscuit shapes with an appropriate cutter. Ideally, a bourbon biscuit is 5cm x 3 cm or thereabout.
6. With a skewer, dot holes into the cutouts. This will ensure that the inside cooks well. Then transfer to the lined baking sheets. Sprinkle some caster sugar atop each biscuit.
7. Bake for around 10-15 minutes on average, but it will depend on the quantity where more biscuits will require longer cooking.
8. Allow your biscuits to cool on a wire rack as the filling is being prepared.
9. To prepare the filling: cream some butter until fluffy. Then add some sifted icing sugar and cocoa powder and beat very well. Add coffee essence and give the mix a final beating.
10. To fill the biscuits: working on the underside of one Bourbon biscuit, spread a heaped teaspoon of the filling cream over it. Smooth the edges and sandwich with a second biscuit.
11. Store biscuits in airtight biscuit tin.

Alternatively, you may want to make a giant cake version of the Bourbon biscuit. See the silicone baking mould here: