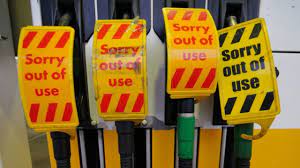 A man who refused to panic buy petrol was left stranded on the M1 yesterday as his car ran out of fuel.

DL decided not to join the queues of panic buying motorists waiting at petrol stations as he didn’t want to contribute to the hysteria surrounding the fact that fuel might be delivered a day late. This was despite him having to undertake a 400 mile round trip journey that weekend.

Explaining his decisions, DL said “I didn’t want to be the one that took the last drop of petrol and deprive someone else. And I certainly didn’t want to make the situation worse than it was. Besides, it shouldn’t be an issue; there’s enough petrol to go round. Or at least there was before everyone else filled their cars up.”

As he waited for hours for a fuelled up rescue van to arrive, DL reflected on previous attempts to not inflame panic buying situations.

“Already this year I’ve seen my friends disappear off on a cycling holiday without me as I didn’t want to buy the last bike, I never got the flag for my zoom backdrop and as for when there was problems with loo roll…well let’s just say the Daily Mail beats The Mirror in that situation.”

The man from the RAC chipped in. “This couldn’t have happened to a nicer man. The fact he’s waited here for several hours, has missed seeing his sick mother, and will be dropped off somewhere random shows how caring he is. If everyone behaved like DL, then he wouldn’t be in this predicament”.

No sympathy from those panic buying

Other motorists were less understanding.

“What a dick,” said one. “I managed to get petrol, and I’m only driving half a mile to the shops. The problem with that bloke is he’s just lazy. I had to queue for an hour to get petrol. That’s hard work for you.”

Obviously it does beg the question who are the clever ones. Is it those who get in early, get their fill and trigger the panic buying problems for everyone else?

Well, we’ll find out at Christmas when half the population is starving as the other half work out what to do with the four turkeys they bought in November. There’s something to look forward to.