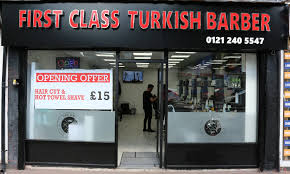 I found myself in the hairdressers the other day. Actually I say hairdressers, but this was very much a barbers. A Turkish barbers. All over the place young Turks with razors were cutting hair like sheep shearers in a hurry.

I watched as a student took photos of his completed haircut with his phone, presumably to show off his new style on Instagram, Twitter or Snapchat. I did think that at my age maybe I should do the same, not to share with my limited Facebook followers but more to remember (given my fading memory):

I was offered a coffee but declined on the basis that I wanted to be out of there as fast as I could. Women may be able to sip coffee, read a magazine or chat while they have their cut but I don’t. I’m still scarred from going to a barber’s as a boy with my father that was filled with cigarette smoke, dodgy magazines and men dozing off. It’s why I chose to go to the Turkish barber. I had been told it was quick.

Anyway I duly took my turn, allowing the Turkish barber to choose a style very different to what I thought I’d asked for. I don’t like to shout in a barber’s. In fact, I’m not keen on talking. So when I’ve gone backwards and forwards a couple of times trying to explain “slightly shorter” I give up, nod and smile. I mean, how bad can a haircut be?

Anyway a blur of razors and low numbers resulted in something like a middle age skinhead. I’m not balding, but looking in the mirror later I got a good idea of what I might look like if I did.

It’s part of the problem of wearing glasses. They ask “this much off?” while looking at you in the mirror. However because you took your glasses off, all you can see is a blurred outline of something. I know you’re shouting at me “just put them on again”, but then it’s a kerfuffle as you suspiciously rummage away under your barber cover thingy. What’s more you only end up saying “that’s fine” anyway. You might as well just miss the kerfuffle.

However once my Turkish barber friend had finished cutting I entered a whole new set of experiences. First my eyebrows were shaved, cutting away those rogue hairs I didn’t know I actually had. Then he lit a stick in front of me and shoved it under my nose and in my ears. If the rogue hairs had been longer, it could have got quite nasty I’m sure. For an instant a shut my eyes.

The next thing I knew I was suffocating. The nice barber had thrown a hot towel over my face and I was sucking air in through the cloth. I’m sure it was the feeling you get from being waterboarded, but I’m guessing in those situations they don’t rub your shoulders at the same time.

Aside from the obvious health and safety risks, it is clearly a sign of how things are moving on in the world of male grooming. I’m not sure at what point I should stop worrying about the hairs emerging from my ears and nose, and the quality of my skin tone, but for a while I was flattered they still thought I should.

At least I was flattered until I was asked if I paid the concession (over 65) rate. It did however give me some hope that I may have at least another 15 years of male grooming in me.

God knows what my father would have made of it all. A barber that does grooming? And a Turkish barber at that.