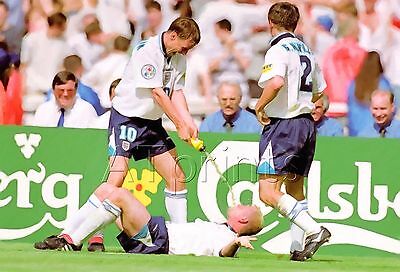 As England’s relentless progress to football greatness stuttered and fell, one man who wanted to recreate Paul Gascoignes famous “dentist’s chair” England goal celebration ended up with more than he bargained for.

Jim Bowen (JB) approached local dentist Sami Smiles and explained he needed to experience the real “dentist chair” position before being able to pose properly, after witnessing Gascoigne’s celebrations against Scotland in 1996. Despite Gascoigne’s pose being 25 years ago, JB felt that it would be great to recreate the next time he scored in one of his Sunday league games.

Once in position in the dentist’s chair, Dr Smiles offered to do a quick review of JB’s oral health. Despite protesting he “cleaned, flossed, and rinsed” it turned out that the crooked, stained and somewhat broken teeth needed some remedial work.

“I told him I flossed,” JB explained, “but it seems that doing it the night before a dentist appointment isn’t enough to stop the decay. Next time I’ll just say I do it all the time.”

After 2 hours JB emerged and, with a lop-sided smile, he explained how he had decided the dentist chair wasn’t for him.

“Turns out a root canal isn’t what I thought it was going to be. I had images it was something pleasant, and like walking along next to the water in dappled summer sunshine. I never imagined it was going to involve sitting in the dentist’s chair, keeping my mouth open for hours, while they drilled deeper and deeper into the core of my tooth. Last time I got close to keeping my mouth open that long was when I completely shocked by someone breaking Covid rules to buy garden products.”

Dr Smiles was all smiles (in a completely white, perfectly straight sort of way). Having relieved JB of nearly £600 for his session, he felt that he had taught JB a valuable lesson about the importance of dental health.

“Visiting a dentist regularly is really important,” Dr Smiles explained. “I have a really expensive lifestyle to maintain, and most people would benefit from a bit of remediation work. The fact you may not know that, you may not need that, and definitely won’t want that doesn’t matter at all. The beauty of dentistry is you can’t see what I can…or not.”

Avoiding the dentist’s chair could be good for you

Actually, according to the BBC, there is no direct link between flossing and dental health. However if you have a small mouth crowded with teeth, then according to some research there may be benefit in trying to extract the remains of those pork scratchings wedged in those gaps.

Given 90% of adults in the UK have at least one filling, either people aren’t being completely honest about their dental hygiene once in the dentist’s chair, or it’s the dentists who are smiling.

And you might be confused about it anyway. Amalgam, which is used for most fillings in the UK, has been linked to brain issues and kidney problems. Sweden and Norway have banned amalgam. Ireland, Finland and Slovakia are following suit. So expect to see them thinking more clearly over the coming years than us midlifers with a mouth full of metal.