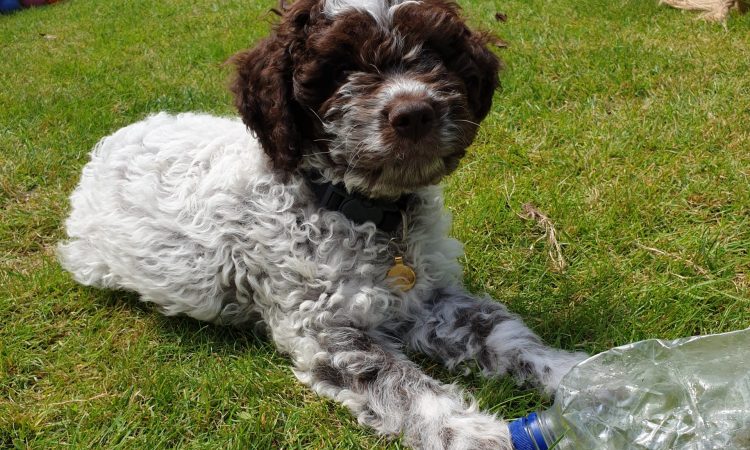 I have a just got a puppy and now understand why they’re so keen to empahsise that a dog is for life and not just for Christmas. If I had received a puppy at Christmas, when all I really wanted to do was eat, sleep and watch the occasional TV programme, I would have been severely disappointed (but more of that later).

It turns out that buying a puppy is a bit like having a baby. And I say “a bit like” deliberately, as when you start reading the online material (which you will) the lines seem blurred between a dog and a small person. Don’t get me wrong there are similarities, but maybe not as many as you’re made to feel.

Anyway, buying a puppy is supposed to be good for stress and good for your physical health (especially if you have trouble with your hip). That may be true at some point, but the buying process isn’t. In fact I ended up feeling like an inadequate numpty who knew nothing about dogs and the world in general. In all fairness that might be a good thing if it puts off anyone not committed to at least a few sleepless nights and plenty of shit in their bin.

Firstly, like so many things in lockdown, demand is high for a furry friend. Prices have doubled since pre-lockdown, and in general dogs are in short supply. Buying a puppy isn’t cheap. You could be talking a lot of money, with few costing less than £1000 now. Let’s hope your memories (true or false) of that last holiday with a gorgeous hotel view are good ones, as it could be a while before taking the next. My holidays seem so long ago now they’re becoming whispers of thoughts. Just as well I kept a diary.

Obviously a rescue dog could be a cheaper alternative, but it transpires that most dog rescuers aren’t keen to pass on a troubled soul to newbie owners. In hindsight it’s understandable, although I can’t help feeling sorry for those dogs still stuck in kennels because I may not have all the skills of an experienced dog owner. Many of us have managed to raise kids and hold down a job without being taught how. OK, I may have failed in holding down a job, but my kids still speak to me. Occasionally.

And so after no responses from the many dog shelters, it was on to the online sites. At least that was until people started telling us that many of the dogs on those sites are puppy farmed, and you shouldn’t encourage the dog-for-profit mentality. Worse still, another friend described how dogs were stolen, and then sold on for a profit, on those same sites. All of a sudden it felt that I was entering some dark underworld of organised crime. I’m not made for that. I’m a good solid coward if nothing else.

It was a friend who suggested getting a dog like theirs. Their dog seemed OK. What was not to like. Medium height, medium temperament, good for allergies. Generally middle of the road like me. I’d never heard of a Lagotto, but was assured they were fun, friendly and they didn’t make a mess (that last bit was a blatant lie). Over a beer or three (the only way to get me to make any decision) we agreed to be introduced to the Lagotto breeder.

Lagotto? What is that?

The Lagotto Romagnolo is an Italian breed of dog. It originates in the marshlands of the Delta del Po in the eastern part of the Romagna sub-region of Italy. The name derives from Romagnol can lagòt, meaning “water dog”

Interviews are not just for jobs

As it turns out this wasn’t an informal chat, but more an invite for us to “apply” for the possibility of getting a dog from the breeder’s next litter. During email and phone exchanges you had to promise to do dog training, be considerate owners and provide ongoing updates on doggy progress. It was like going for a job interview. “So where do you see yourself in five years time?”.

(If you’d asked me that five years ago I definitely wouldn’t have said where I’ve ended up today, so once more made something up).

Once through the first round of interviews, the next was a face to face meeting and chance to choose a puppy from the eight available. It turns out the breeder really did reject people at this stage. Appearances were everything (so no white, light clothes or expensive brands). In this case the tattier the better. Luckily I excel at tatty.

“The puppy will choose you,” was what every book, forum and friend agreed. Whilst that may be true in some instances, here the breeder had already decided which of the dogs would fit best with each applicant. Although invited to choose, the breeder used a frightening combination of Jedi mind tricks and cold, hard logic for us to end up choosing the one she wanted us to have.

To be fair, when you see eight puppies fighting they all look pretty similar. Choosing the one special one that doesn’t bite, responds well to commands and is easy to house train is impossible. In thirty minutes you sit watching balls of fur come together to create a single mound of fluff. There’s nothing there to help.

So dog chosen, job done. Not a bit of it. In between choosing the pup and handover day there were plenty of exchanges with the breeder, videos shared and excitement whipped up. It was a bit like becoming a dad, without the childbirth. Amazon delivered stuff regularly, people provided hand me downs and the kids turned their noses up at the idea of poo bags.

Eventually the puppy was old enough to leave home (8 weeks). You can’t help feeling a bit guilty lifting that little body and stealing him away from mother and siblings and sticking him in a (carefully prepared) car for the long journey home. However, whether it was fear or the fact he was the chilled one of the litter as the breeder had said, he didn’t make a sound until he was home.

As I cracked open a beer and watched him sleep in the summer sunshine, I couldn’t help but think that the stress was done.

Which goes to show I know nothing about dog owning. I’m a numpty after all.

Shocking 2 years after my hip replacement. Was it worth it worth the hassle? - Redundant Midlife

[…] yesterday I cycled for 3 hours, walked another hour and still managed to try to make my garden dog proof (actually I failed miserably at that. Who knew dogs could dig so well?). I may have been too young […]