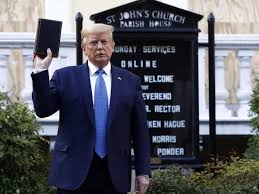 Rumours emerged today that Donald Trump found Jesus in the final days of his campaign, as an alternative to using an army of lawyers to halt the democratic process. An insider described how Trump prayed hard and donated the last of his campaign funds to good causes after hearing how Jesus had managed to feed five thousand people with six loaves of bread. Trump believed converting every six Republican votes to five thousand votes would be easy after that.

The Son of God however was unimpressed saying that in his time he had followed the rule of law and, despite being crucified, still felt it was the right thing to do and that Trump should do the same.

“Donald should accept his fate. If he has been a good man he may rise again. Maybe not in politics, but certainly they’d have him in McDonald’s.”

In a secret interview Jesus pointed out that what was being asked went beyond your normal back-to-life type of miracle.

Trump found Jesus, but he couldn’t help raise the campaign from the dead

“His campaign is dead. There’s no bringing that back to life. It’s not a matter of one person, but millions across thousands of miles of country. I ain’t got time for that. #sorrynotsorry.”

Jesus did however suggest that some of Trump’s antics wouldn’t help his cause when the final judgement came.

“He’s claiming miracles that just don’t qualify. I mean, did he actually drink the bleach? No. Save thousands from Coronavirus? No. In fact he should count it as a miracle he wasn’t ousted from office earlier.”

Jesus went on. “Thinking about it, Trump reminds me a bit of Herod. Herod employed secret police to see how happy the population were, suppressed criticism and spent huge sums of money on his various building projects. His buildings were very large, ambitious things aimed at enhancing his reputation. He gave generous gifts to other countries to keep them sweet. In fact, you could say Herod wrote the bible for Trump to follow. Except that would be confusing, given the bible is all about me.”

Our reported tracked Trump down to his local golf course where he remained defiant on the topic. “I don’t need his help and I never asked for his help, God help me. Actually I found Jesus because needs my help. I can save him and his religion. I have more followers than he has. Does he even Tweet?”