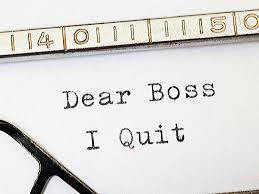 If you think without your blood, sweat and late nights your organisation would fall apart then you might have a surprise. When one middle aged man resigned from work it came as a shock to find his colleagues only loved him for as long as it took to grab his laptop and chair. Read his experience below….

After resigning from work I thought it was a good time to reflect on my experience leaving a German business.

Firstly, it should be noted that they followed every process to the letter. They were German after all.

Secondly, the company is still in existence, which must counted as a success of some sorts. Most others I’ve left have since collapsed or been taken over. Anyone remember Lucas Aerospace, Entranet, or an English led NatWest? Admittedly, I can’t promise how it will fare over the coming months, but for all you investors out there, it might not be a bad time to reduce your exposure to the German stock exchange. [ed: since this was written it has now merged with another organisation, so doesn’t actually exist any more]

I must admit I was touched by the fond farewells. Ok, so there was no leaving card, drinks, meal, present or the like. However at least a couple of people said I would be sorely missed, especially if they could have my phone, laptop and or/chair as I walked out the door. Perhaps if they’d expressed those same positive sentiments slightly earlier in the process I could have been persuaded to stay.

In fact I was slightly disappointed by the informality of it all. Gone were the days of handing over a handwritten letter explaining the reasons for resigning. Gone were the days of sending a typed letter which had to traverse an internal post systems for several days, giving you ample time to change your mind. Now it was a case of ‘drop me an email and we’ll see when we can be bothered to do your exit interview’.

I had at least expected some sort of battle to keep me, possibly with a pay rise attached. In the end all my boss said was, “anything we can do?” in a half-hearted attempt at stopping me. Half-hearted as all he could offer was a more caring environment and opportunities to grow. If I had wanted to grow I would have drunk fertiliser, but the things that would have kept me (money, holidays, more fun) weren’t on the table.

It made agonising over the decision seem rather pointless, as once I’d mentioned I might leave I was a ready-made cost reduction, so an increase in pay was never going to happen.

Resigning from work, and how the work gets done

When the big day came I walked out the door feeling slightly lost. My bag was a laptop lighter, my phone was no longer pinging and I had nowhere to rush to. My boss waved me off, asking in a whispered voice that if there were roles going in my new organisation would I let him know.

As much as I would like to imagine an angst-filled room agonising how my work would now get done, I’d be a fool to believe it. I know from staying when others left how quickly an individual’s contributions are forgotten. Occasionally a leaver is blamed for poor performance in the way new football managers claim it will take a “while to turn this team around given the way Big Sam destroyed it”.

It’s a quick win for all concerned. As I stare at an old team photo, I wonder who had taken the soft option to claim I had ruined the company and buy themselves time.

I knew I wasn’t leaving a disaster behind, but once you’re gone you’re gone and fair game for office politics.

So in reality, by the time I was cracking open my evening commiseration wine, to most of my ex-colleagues I was already a distant memory.

Over the next few weeks people I had slaved with, laughed with, and spent many an evening with stopped contacting me. A whole network of people disappeared to become LinkedIn buddies in name only. Occasionally a few dropped a note to check I was alive, but the ratio of “best buddy” work colleagues to those who became lasting friends was probably 15:1. You know who you are “1”.

Some of it was also me. You can’t keep in contact with everyone, there isn’t physically time. I’m sure I would still have a good night out with most of those I worked with, but for others it was clearly a case of only having work gossip in common. When you can no longer share the moans, groans and funny stories, and all you talk about is your middle age aches and pains, it becomes “ta ra big buddy”.

At least when I resigned I had another job to go to. It was better than being made redundant. Then it really is a case of watching the phone, hoping for a recruiter to call in a deathly silent post work world.

What people were not admitting

Mostly the contacts I did receive were roundabout ways of seeing what the job market was like. As much as the people I left behind claimed they were enjoying work, it was soon clear that for a lot of them it was just that, work. What’s more they’d be glad to try something new. For many, it was the fear of starting again that stopped them resigning from work and moving on themselves.

That said what actually appealed to many was going somewhere where they knew people who could vouch for them, or cover for them when they hit the golf course during working hours.

It’s not all bad

Although while you’re working you think you’re loved and important it’s sobering to realise in some ways it’s a convenient love which might not stand the test of time. However that doesn’t mean you need to be miserable or grumpy. It just means you need to make the most of the fun when you can.

What you’ll find is that a new job offers the same activities, people and politics as the previous one. Changing isn’t something to be afraid of. In the new place you’ll become a special interest for some, probably replacing the last person who left, who in turn will be sat at home waiting for the phone to ring. And so the merry-go-round goes on.