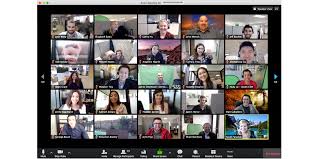 Work video calls can be great, but they also allow all sorts of people a peek inside your house. Be careful what’s in the background if you don’t want them to look at you in a different way in the future.

As work video calls become the norm – think Teams, Webex, Skype, Zoom – you are giving people a hitherto unseen insight into your life. Previously you had to beg people to switch on their video to give you some Friday fun. Now they are an integral part of staying working at home under lockdown, but they can be fraught with danger.

Remember the adorable kids who ruined one BBC correspondent’s call. How we all smiled and laughed. How he then ranted at his wife/nanny/kids for making him the laughing stock of the world. You don’t want that.

On one call recently I had to endure the sight of a colleague’s (male) underwear hanging off a clothes horse behind his shoulder. I now know he wears large, dark y-fronts. That was an image I didn’t need. The other trouble with a video call is that you feel compelled to look at the other person on the screen all the time. It’s like having your eyes propped open with matchsticks. I couldn’t tell him I was offended by his underwear. I couldn’t turn the video off or look away. The image was burned into my brain.

So what do you need to think about before you spend your days on work video calls?

1. Clothes are to be worn, not exhibited

Well let’s start off with the clothes. Drying clothes is a not a good backdrop. I know they’re clean, but do I want to spend a call staring at someone’s underwear? On no level is that a good thing. It’s not sexy, it’s not clever and it’s not professional. Certainly don’t leave them draped there deliberately. Even in a virtual world it’s no way to start up a relationship by gazing on your colleague’s lingerie.

Let’s not even go to the dirty clothes scenario. Sweat marks, skid marks, any marks, are for you and you alone. Move them from the floor/bed/table or wherever you dump them and hide them away.

Once it was pointed out to me that I had a mess of coats hanging from hooks behind me. Personally I thought that was nitpicking, but I did remove my old macs and Parka jacket with the furry hood for future calls. Don’t be afraid to make changes.

2. Wall hangings have a shelf life

Next, remember that the things you put up on your wall twenty years ago and have forgotten about are now being seen by fresh eyes.

Certificates are a no-no, even if they bring back fond memories for you. People will be virtually nudging each other and smirking at your cycling proficiency award, even if you’d put it there for a sense of irony/nostalgia. Any work presentations are also out. Showing people that the “Best Employee of the Month, 1998” certificate still has pride of place on your wall twenty years on, just shouts out “Insecurity!” really loudly.

Photos are a difficult one. Make sure they’re not inappropriate holiday snaps, or you in some drunken fancy dress bender. Family ones are ok, but photos of your twenty-something year old kids as babies suggests laziness or boredom on your part.

3. Books make you who you are

I know some people have invested in buying bookcases to have behind them on their work video calls. IKEA does a nice range, but it seems a lot of effort just to impress.

However if you do go down the bookcase route, make sure if you that the books in the background are appropriate for the audience.

Obviously the nice thing about books is that they can be easily swapped about. Drag out the ‘How to be better at…” books during the day, and swap to classy novels at night.

Want to be a teeny bit suggestive? Leave ‘Fifty Shades of Grey’ on the shelf, and better still break the spine so it looks well thumbed.

Obviously remove your Viz annuals and anything that is purchased from the top shelf of your local newsagent. Especially if it’s niche.

4. Whiteboards are for teachers. And motivational leaders!!

Be careful with whiteboards. If you are going to have one visible, make sure you (or your kids) haven’t drawn any inappropriate ‘cock and ball’ pictures on it.

Lists should be motivational and have exclamations after them. “Finish brilliant presentation!”, “Call my team!” and “Do admin!!” are all acceptable. Your shopping list is probably not.

If your video call is from the kitchen at least make an effort to clear your plates away.

Worse still, don’t leave last night’s empties on the side. People will be noting that your drinking is increasing, or at least you’ve now worked your way onto the wine boxes as a means of drinking more without clatter of shame at the recycling bin.

Obviously, and linked to “People” below, if you had friends over and one of them is still asleep on the floor, try to move them on. You could cover them with a table cloth, but it may freak people out if they suddenly stand, ghost like, during one of your calls.

Finally, ensure that no visitors stray into shot during the call. If they do, don’t encourage them to speak to your work colleagues. Don’t ask them to wave. Shoot them a withering “I’m on an important work video call so bugger off” look and crack on with the call.

The final point (which may not apply to many) is that if you are living with a work colleague during a lockdown and haven’t made that arrangement clear, make sure you don’t call from close to each other. The annoying echo will have to be explained, as will why your wallpaper is coincidentally the same as your colleague’s.

Work video calls are becoming the norm, but they are still a bit strange. Just think of it like inviting your boss in for a cup of tea. Imagine the disappointed look they’d have as they see the pit which you call home.

At least on a call you only have to organise one room. The bomb site can be behind another door. Just make sure no one opens it. Keep it simple, keep it clean. And that’s not just your underwear.