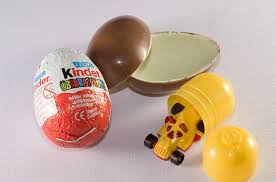 Before you eat your Kinder Egg and break open the yellow capsule with the toy inside, stop and think for a moment. Could there be more to a Kinder Egg than meets the eye?

Kinder Eggs have been around since 1974. Dreamt up by Italian Michele Ferrero, Kinder Eggs were designed to provide children with a small gift each day, building on the Easter tradition (hence the egg). To be a healthier alternative to other sweets they were made with a higher milk content than other chocolates (although not quite in the same league as the Milky Bar).

Over 30 billion Kinder Eggs have been sold worldwide since manufacturing started in the mid-seventies. They are currently made at the rate of 1.2bn per week. That’s a lot of surprises. In fact due to the surprise toy, Kinder Eggs are one of the largest toy distributors in the world (similar to McDonald’s with Happy Meals).

However Kinder Eggs are not all fun and games; they also have a dark side.

Apparently responsible for several deaths, Kinder Egg Surprises are banned in the US due to the small toy being a choking risk. For a country happy to distribute guns for fun, this feels a bit of an over-reaction, but then again maybe it’s fake news.

Chile also banned Kinder Eggs in 2016 as part of its crusade to prevent obesity. It felt selling the eggs with a toy inside was bad for health, as it encouraged children to buy chocolate for the wrong reasons. At 110 calories per egg the Kinder Egg is much less calorific than other sweets or cakes, but that gift can be oh so tempting…

Is a Kinder Egg a metaphor for life?

So there’s already more to Kinder Eggs than you may think. Some people believe they’re a metaphor for life, or your personality at least.

Firstly on the outside the shiny tin foil is like the social media life you lead. Cleverly designed to be superficially attractive, that glossy, shiny foil is like the ‘all is good’ existence you see on Facebook, Instagram and Twitter. People are attracted to the vibrant, colourful packaging, and find the anticipation and thrill of what might lie beneath enough to keep them happy.

Obviously though there’s more. You may have bought into the egg based on its looks, but you quickly go to the next level, peel off the wrapper and reach the chocolate.

Here there’s decisions to be made. Some people love the Kinder Egg flavour, whilst others find it a bit too sweet and sickly due to that high milk content that makes it supposedly healthier. You’re not going to change that chocolate flavour, it is what it is. It’s a personal thing whether you like it and live with it or not. A bit like you in fact.

Sadly some people stop there, satisfied with their chocolate fix, but that’s missing the best bit. The Kinder Egg Surprise is all about the little yellow container cleverly inserted inside the egg, If you ignore this you’re missing out.

Cracking the container is where the fun starts

The yellow container isn’t easy to get open (twist or pull, who knows?).

Once you are inside you’re then faced with a collection of small (choking hazard) parts.

Many people walk away at this point, disappointed at not having an instant toy to play with. The effort required to build something is just too hard, especially as the chocolate hit fades and other sweets are available.

However, for those willing to spend some time putting those parts together there’s the fun of creating something more lasting. Not only have you enjoyed the chocolate, but you’ve created something that’s entertaining long after the chocolate taste has faded and the silver foil has been binned.

The toys are changed each year (there’s about 150 in circulation) and some people have made a hobby of collecting them.

A Kinder Egg then is more than a sweet. With its shiny outer, love it or hate it chocolate layer, inner surprise and effort required, it could describe you, or someone you know. Real friends are the ones who have spent the time going through the layers and then putting those small parts together to make you a better being, or those you’ve done the same for.

So next time you’re at the checkout looking at the Kinder Eggs, have a think about those people who you’ve let inside that yellow container.

Just don’t take them to the Chile or the US. That would be criminal. They can be bad boys, those Kinder Eggs.