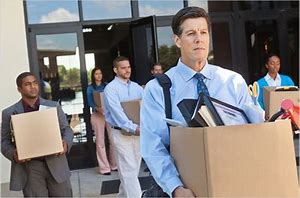 Whenever you leave a job, whether it’s because you’ve resigned or been made redundant, it’s a sad time. No one likes change, especially midlife, but if you understand a few key redundancy facts (outside your formal rights) to set your expectations, there’s a much better chance you will stay happy.

As much as you may think the company can’t cope without you. It will. And it will quickly.

When you’re there you may think that you are your small crew are keeping the business going. You leave and guess what, the business keeps going. Big organisations especially grind on as if nothing has happened. It’s like running over a squirrel in a 4×4. A bit messy, small jolt, moment of sadness, but twenty seconds further down the road and it’s all forgotten. Unfortunately you’re that squirrel.

People will say they’re sorry to see you go, but…

You’ll get lots of lovely emails from people saying goodbye, and many will be genuine. There will be a few however who are eyeing up your laptop, office chair, space of even friendships. They’ll send the email, you’ll feel pleased, but behind the scenes they’re already stepping into your space. What’s more you’ve become their get out clause for not delivering their promises. “If it hadn’t been for XX I would have done it by now. Now he’s gone we’ll be able to get on….”

“We’ll meet for a beer!” are probably the last words you’ll hear as you exit. And in the first flurry of leaving you may indeed have a few outings with work colleagues. But ask yourself, how many ex-work colleagues turned up when you went out drinking after work? Probably not that many.

Part of the reason is organisation. People spend their days organising things. Unfortunately they’ll have run out of motivation when it comes to socials and just won’t be bothered to add you into the email trail. You can’t do that spontaneous post beer work anymore and besides, who are you again?

You may try to set something up, but don’t forget these people are still in work. They may be a bit cautious of getting drunk on a work night, or even may have work to do into the evening.

After a while you’ll get downhearted and petulant and stop asking. They won’t notice.

If meeting up does happen, be prepared for feeling an outsider

If you are lucky enough to meet up, be prepared for the time when you don’t recognise the names or things going on. You don’t work there any more. Most conversations revolve around the office and you’re not included. This is when you realise the people you thought were friends were actually work colleagues with whom you had nothing in common other than to moan about work or gossip about office scandals.

No worries, probably best shot of these people anyway because….

You will make a friend – or maybe two

It’s not all gloom and doom. I’ve changed jobs several times and always come out with at least one long-term buddy. These aren’t always the people you expected, probably as it takes a bit of effort on both sides. However these are the people you find actually you do have something in common with. With these people you can while away many a happy hour discussing life in general over a beer, rather than the colour of your PowerPoint slides.

You will need a hobby

There are many posts describing how to fill the life of a redundant person, but daytime TV shouldn’t be part of it. Although job hunting is a time consuming activity, it doesn’t fill a day. You need to develop some new skills (not necessarily dishwasher stacking) or do something productive to fill your day. Start a blog maybe, volunteer, get that body you always dreamed of. Or even go to the gym.

There is life beyond

Hard as it may seem at first, eventually you do move on. Whether it’s becoming contented in the world of domesticity, or finding a new job, either way eventually you start to forget those people and work you left behind. It can be liberating to realise that actually you’re better off elsewhere away from the politics and pain.

Leaving is change. Humans don’t like change and its impact can be hard. However recognising the process you’re going through and having the right levels of expectation can certainly help come to terms with your new life. And who knows, you might actually enjoy it!

You’re a better person for it

All life experiences are good (well obviously let’s exclude terminal illnesses from that). They give you something to talk about and change your perceptions and ambitions. Personally I’ve got some great dot.com stories, tales of the destruction of the banking sector and how the fact cemeteries didn’t need mowing anymore lost me my first job. Yes they all resulted in redundancy, but they give me something to talk about and a perspective that is valuable.

It could happen to anyone

It could. Anyone is a target. Don’t think in your next job you’ll be safer. In the world we live in now it is an unfortunate part of work. Perpetual reorganisations create work for some, and remove it for others. However it means you weren’t targeted for being poor at what you do. Mostly you were in the wrong place at the wrong time. The people you left behind might be next.

It is what it is unfortunately, but don’t take it personally.

Redundancy facts- so what?

Leaving a job is stressful. It may not be up there with death or divorce but there is stress. You need to be prepared for it, accept the truths and look to the positives. People will help you. You’ll find out who your friends are. Eventually you’ll move on into a new role. You may even get a new special drinking buddy. What more could you want?