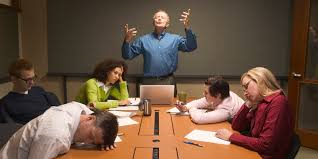 Humans have always had meetings. Often dull meetings, but meetings nonetheless. Since cavemen sat around fires discussing paintings, people have loved to gather, talk and daydream. In large corporations it is part of the culture. More than that, it’s part of our evolutionary instinct, like over-eating and binge drinking.

We’re told that humans need to conserve energy by minimising effort, a hangover from our calorie-scarce past. It is so much easier to have a dull meeting than to think of a new idea, write a document or make something useful. Think of the calories actually doing something might burn, and the fatigue that might set in!

Today people gather in offices in the hope that one of the group will make the kill (or sensible decision), so all attendees can agree it was a good use of time without having to expend any effort. And so we all sit there in dull meetings, waiting for that person to make the kill for us. So you do need some attendees to make your daydreaming all worthwhile.

The key to any good meeting is to have at least one Speaker. Speakers claim to hate meetings as nothing gets decided and other people don’t participate. Speakers are vocal. They can deliver monologues that monopolise the time, getting their decisions agreed through apathy rather than excitement. In the end, it is the fact that Speakers exist that makes businesses move forward. Without them the group would have to expend too much energy, debate too long and conclude without direction. Brexit anyone?

Frequently I have sat in meetings with ten or more people squashed into a room. If the time was divided equally each attendee would get about six minutes air time in your average meeting hour. Only it didn’t work like that. A couple of Speakers would dominate the hour. So what was everyone else doing? Listening? Taking notes? It turns out none of these.

What do people do in dull meetings?

Before I was made redundant, I spoke to a few managers about what they did in a meeting.

“I daydream,” said one honest individual. “I spend my time thinking about my life outside work, sometimes straying on to some fantasy about someone else in the meeting if the meeting is really dull. It’s surprising who becomes attractive at the end of a long day. As long as I nod occasionally or offer my agreement to a point, no one realises I’ve not been listening at all.”

Another was equally blunt. “Messaging. Sometimes messaging people in the room, sometimes not. Obviously if it was just a phone meeting I’d be on tetris or something, but in the room you have to look busy.”

The technology people bring to meetings is partly to blame. When I started out I used to create beautiful doodles that wouldn’t have looked out of place in the Tate Modern. Nowadays laptops and phones mean people can do those low brain-power tasks like typing emojis, without looking as if they’re completely disengaged.

Interestingly it’s in our genes to zone out…

However engaging the disengaged goes against all our genetic make up. Those ice-breakers, post-it sessions, votes which are all part of making people involved, only serve to make them desperate to sit by the window so they can watch the weather pass by. Why do you think buzz-word bingo was invented? Not to add billions to the value of the company that’s for sure.

In nature, hunting pack animals like ourselves often live in groups dominated by one or two individuals (the Speakers). We’re going against that instinct, but it requires energy and effort which many people don’t want to expend. Meetings serve to reinforce the importance and decision making power of the Speaker. They feel encouraged, empowered and energised to drive things forward.

So the question is, when you attend a meeting, what are you actually doing? Speaking? Or simply imagining yourself with a cold beer in a sunspot while someone else makes the decision for you. It’s not your fault though, it’s evolution. Ways to break that cycle require effort and energy. Cake anyone?