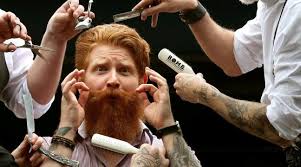 After my experience in the Turkish barbers, it got me thinking about middle aged male grooming. How much should I bother about my appearance? Isn’t midlife the time to sink into comfortable apathy rather than struggle to be trimmed, toned and trendy?

A friend of mine grew a beard. Nothing wrong with that particularly. I just thought he’d moved to shaving apathy, especially as it didn’t stop growing. At one point Santa would have been pleased to have had his bushy face hair. People in the street complimented him on it. He could have been out with a cute puppy instead of a beard, the behaviour and comments were the same.

“Oooh, that’s a gorgeous,” said one man . “Does it take much looking after?”

“Can I stroke it?” asked a woman at the bar.

My friend fields all these questions with the good grace of a bloke not used to being spoken to in public. Occasionally he puts bells or lights in it, especially during the festive season, when he could be placed in the corner as some sort of novelty Christmas toy.

What did surprise me when we went away together was that what I had thought was comfortable apathy, was actually a tough regimen of care. Beard wax, beard oil, beard brush. Before emerging to face the public, that beard had had more loving attention than I had over the last twenty years at home. I was wrong. This was a man a beard grooming masterclass.

So what about me? As I’ve mentioned before, my Turkish barber has branched out into sorting my eyebrows, nasal and ear hair. My dentist is insisting on replacing old silver fillings with white ones (in case someone stares in my open mouth at some point). Bit by bit I’m being pulled into male grooming without even noticing.

I still ask for a haircut that is zero maintenance, and decline all hair products as a matter of course. That used to be because I was always about to play sport and have a shower, now it’s just an aversion reflex before I hit Costa for a cake.

I decided to do some research. Admittedly this was using my limited selection of friends, but it threw up some interesting results.

Most were supportive of their men taking more care of themselves, but straying too far from the core areas (nails, hair) suggested a wandering eye and lustful mind. Moisturiser was ranked as a key red flag, due to its connections with a desire to look younger (and hence attractive to younger models). Hair dyeing was for divorcees or soon to be divorcees only. Gym work was fine, as long as it still left a suitably tubby outline and you did it when the pensioners were in.

Midlife male grooming is a minefield. Too little and you end up like Campo from Last of the Summer Wine with people offering you their seat on the train. Too much and you terrify young girls with your bizarre teen-dad look, whilst making your wife think you’re playing away with the woman next door.

Seems like the Turkish barbers might have it right after all. Excess hair trimmed all round. Job done.