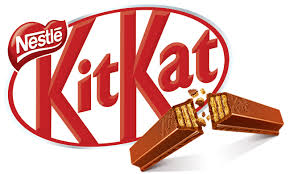 Kit Kats are huge. Well, not in absolute size terms as they were made to fit a lunch box, but in terms of being a globally recognised brand.

Billions of them are made each year, with one being consumed every 500 seconds. They are owned and produced by Nestle (who took over Rowntree) and produced by Hershey’s in the US. They have their own website, and are in a different league to some of the other biscuits I’ve looked at, like the custard cream, bourbon or Jammie Dodger.

The Kit Kat was born in York UK, back in 1935. It was made in response to a worker’s suggestion at the Rowntree factory who asked for a snack that a ‘man could have in his lunchtime’.

Originally called the Rowntree Chocolate Crisp, it was renamed the Kit Kat Chocolate Crisp in 1937 and it was only after the World War 2 it went trendy, calling itself simply “Kit Kat”. That said, it was still some time before the marketing message ‘Have a break, have Kit Kat’ came into being (1957).

It’s uncertain exactly where the name “Kit Kat” comes from, but was recorded as a term for a snack in the 1700s. The one I like best is that it came from a London meeting place called the Kit Cat Club. I have been to a Kitty Cat Club in Brighton, but there were no chocolate biscuits on show there. Certainly not.

Normally provided in red packaging, in World War 2, when the chocolate had to be changed to plain, the packaging turned blue. Things were back on track by 1949.

Exactly what is a Kit Kat?

The standard bars consist of two or four pieces composed of three layers of wafer, separated and covered by an outer layer of chocolate. Wafer was used to keep the costs down, so it could remain affordable to that worker who wanted it in his lunchbox.

In keeping with this lunch box idea, Rowntree’s marketed Kit Kat bars as “the biggest little meal.” However to appeal to those who preferred it as a snack, Rowntree’s also came up with the slogan “the best companion to a cup of tea.”

You can never have too many tea breaks. That concept of taking a tea break would help inspire the even more effective slogan in later years.

Going above and beyond: The many flavours of Kit Kat

There are many different flavours of Kit Kat, including milk, white, and dark chocolate. Over 200 in fact, and many of them are available in Japan where Kit Kats are huge and have also become a pizza topping. Flavours tried in Japan include wasabi, sake, matcha tea, miso soup, soy sauce and Tokyo banana. Weird.

Want a big one? You can make a Kit Kat cake using Moldyfun’s exclusive cake mold…

Giant cakes can make a statement at any party. If you want it to look like the authentic bar Moldyfun.com have exclusive rights to the Kit Kat giant silicone cake mold.

So there you go. Next time you put one in your lunchbox, just think of how many other people are doing the same… have a break: