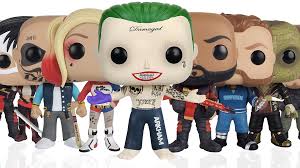 Why would anyone want to buy a small vinyl figure with a slightly large head? Well, it turns out loads of people do. Funko Pops are huge. According to their website, the Funko warehouse holds over a million figures. It’s eye watering. As part of developing on online business selling novelty gifts, Funko Pops are a key product. Here’s why.

Funko Pops don’t see themselves as simply toys either. They’re much happier being called part of “pop culture”, which is why their appeal is so broad.

Funko Pops – The science behind the fun

Their popularity isn’t a fluke. Funko Pops have been designed to tap into our emotions (“aren’t they adorable?”) in a clever way. Standing about 3.75″ tall, their heads make up about a two thirds of that height. Funko Pops eyes have no pupils, and are wide apart. Over time the nose has moved closer to the eyes for a reason. That big head, dark sad eyes thing taps into our psyche like babies and puppies.

However their design has been influenced by the Japanese style of Chibi.

Chibi (ちび or チビ) is a Japanese slang word describing something short (a thing, an animal or a person). It comes from the verb 禿びる (chibiru), which means ‘to wear out and become shorter’ (the tip of something).

Over time the word chibi became used to describe a certain type of anime character. This style, known more formally as super-deformed, features highly exaggerated childlike proportions, with heads sometimes as much as four times the size of the bodies. Funko Pops have taken this and refined to create the proportions and style that we know today.

Funko Pops also appeal to our sense of nostalgia. With Funko Pops being made to cover about every element of film and pop culture, having one on your desk is more about who you are. That might explain why Funko’s average customer is 35 years old (so almost a middle age thing) and split pretty equally between men and women. It’s almost a middle age collectible than a children’s plaything.

A massive range of Funko Pops

Funko has created 13,642 different products in dozens of different toy lines since its inception. Alongside the expected superheroes, you can buy Funko Pops of Prince Harry and Meghan Markle, the Pillsbury Doughboy, and Abraham Lincoln.

With access to film rights Funko produce characters ranging from Marvel characters to The Godfather and The Rocky Horror Picture Show, spreading their appeak across all demographics.

Funko isn’t afraud to go more hardcore either, with Funko Pops of Slipknot Slayer, Motörhead, Ghost and Weezer figures, following in the footsteps of Metallica, Guns N’ Roses, twenty one pilots, blink-182, Panic! At The Disco, KISS, My Chemical Romance and more, who’ve all got their own Funko ranges.

The formula is a winning one as they can remake the same figure over and over in diffirent guises. For example they’ve made 50 Iron Mans, and even more Batmans, so the production line isn’t going to stop any time soon.

So almost character or rock star is available in a Funko Pop. Oh, other than Nintendo characters, as (currently) they believe they don’t need someone else exploiting their brand.

The Funko Pops craze has been around for some time. Founded in 1998 by Mike Becker, they were focused initially on bobble heads with the first being Big Boy, the mascot of an American restaurant chain. However what kept them afloat was an Austin Powers bobble head, which sold 80,000 figures. But overall they weren’t doing brilliantly, and when they were sold to the current owner, Brian Mariotti, they were still a bit niche. However from around 2010 the brand sky rocketed, and the rest as they say is history.

Some Funko Pops are worth keeping hold of or finding as an investment. A case in point is a limited edition Star Wars Dart Maul Funko Pop that can be worth over £1500 if you have one. Some are worth even more. They include Alex from A Clockwork Orange, a headless Ned Stark from Game of Thrones, and a metallic Harley Quinn from Batman.

There is even a whole ecosystem of chasing the rare, the original or the different.

For example, a “Chase” is a variant of a Pop that has something different about it. This can be a different coloured piece of clothing, a different object held in its hands, or a completely different mould. Generally, Chase Pop Vinyls are produced in a 1:6 ratio to a regular Pop Vinyl, although only select pop vinyls will come with a chase variant. Some are produced at even rarer ratios, like 1:24. This makes them much harder to find, and more valuable.

Chase Pop Vinyls can usually be bought by chance at shops, or by pre-ordering. While they retail for the regular price (around $10) they become immediately more valuable once you get home, often increasing by five times or more over the retail prixe. While some are worth less, purchasing a Chase Pop Vinyl in stores is a near-guarantee that your Pop Vinyl will be more valuable and you’ll make some money.

Funko Pops – where can you find yours?

So Funko Pops can be an investment, collected by anyone and appeal to your sense of self. Demand is still increasing and Funko Pops are accelerating the pace with which they can produce and sell new ones.